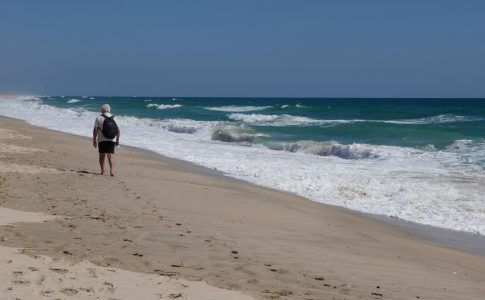 Bill came to Housing Matters after struggling to find a job and losing his home. He was connected with Brian, our Service Navigation Coordinator, and offered shelter in the Paul Lee Loft to begin his journey back into permanent, stable housing. Soon thereafter, Brian connected Bill to the Homeward Bound program; Bill had a sister who would welcome him into her home. Homeward Bound paid for his plane ticket to reconnect with his family in Kentucky.

As I finished the job I was in town for, a number of things went south. I had congestive heart failure and spent some time at Dominican Hospital in recuperation. After that, I began looking for jobs again. I applied all over, but I just wasn’t able to find a job. My family helped me a bit, and I volunteered at several organizations, but nothing came together.

After so many dead ends, I ran out of money. I still had a car at that time, but I had no place to stay. So I stayed in my car parked in a church parking lot for one night. You never actually get to sleep though, you don’t know who is going to be knocking, the police or a thief.

Eventually, I heard about Housing Matters and went there for support. It wasn’t something that I would have ever imagined happening. I never thought I’d end up at a homeless shelter. I wasn’t drinking, I didn’t have any mental illnesses. I never thought it was possible for someone like me to end up in this situation until it happened. Finding yourself with nowhere to go, no money, no home; with a string of unfortunate events, it can truly happen to anyone. I had a sister living in Kentucky who was willing to let me stay with her for a while. I worked with my case manager and was given funds to fly to Kentucky. The ticket was $300.

I spent a year and a half in Kentucky, applying to jobs in Santa Cruz. My heart and friends were in Santa Cruz and I was determined to find a way to return.

After working and saving money, I was finally able to return to my friends and support system in Santa Cruz. Now I live on the Westside in my own apartment. I can wake up early every morning and stand out on my driveway, before the traffic starts, and listen to the waves break in the distance, and the sea lions at the wharf. I’ve made it back, and I am on my feet now, I have a job in my profession. I am comfortable where I am and really happy to be here. My quality of life is high.

Recently, I decided to make a contribution to Housing Matters to repay them the $300 they gave me for a plane ticket. If it wasn’t for their assistance and my return to Kentucky for that year and a half, I wouldn’t be here. I am so thankful for that time to collect myself. It allowed me to return to a town that means a lot to me.

This story was collected in March of 2021 by Andrea Feltz, Community Engagement Manager