Housing as healthcare: A prescription for change 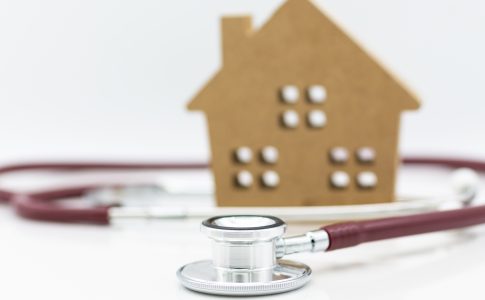 A future in which doctors prescribe housing as a treatment for chronic homelessness may be difficult for some to imagine. But as more communities — and healthcare providers — embrace a multifaceted approach to addressing homelessness, that scenario may not seem so far-fetched.

“There’s a movement underway to combine housing and healthcare,” says Tom Stagg, Chief Initiatives Officer for Housing Matters in Santa Cruz. It’s an idea that has been talked about for years, Stagg said, as research continues to link poor health outcomes—and higher mortality rates—to housing instability. But now, it seems talk is finally turning to action.

Stagg pointed to two recent developments in the healthcare industry as evidence of this change: major Medi-Cal reforms that couple clinical care with non-medical services, including housing supports, for the first time; and sizable investments in affordable housing from the state’s largest healthcare insurers.

Integrated supportive care
In January, California began rolling out Cal-AIM (California Advancing and Innovating Medi-Cal), an ambitious plan to integrate Medi-Cal more tightly with social services and improve quality of care for Californians currently enrolled in Medi-Cal programs. Cal-AIM will include a strong focus on supportive services for those living unhoused, providing financial assistance with one-time housing costs such as first and last month’s rent; short-term recuperative care; and help with finding housing.

“If you don’t have somewhere safe to sleep at night, and you’re not sleeping, that’s going to have wide-ranging impacts on your health,” Ratner said.

He explained that without the tools to address the underlying behavioral issues that may be contributing to someone’s illness, treatment options have been limited. As a result, patients experiencing homelessness tend to cycle in and out of hospitals and emergency rooms, with illnesses that worsen and go unresolved. Under the new Cal-AIM reforms, doctors will be able to authorize Medi-Cal payment for supports that help patients find and keep a stable place to live.

“This is the first time since I’ve been doing this work that the State has said social determinants can be factored into care,” Ratner said. “It may not feel like writing a prescription for housing, but it will come close.”

Other physicians, while hopeful, are not as optimistic about Cal-AIM’s impact.

“The need for affordable housing in California is extraordinary,” said Dr. Joshua Bamberger, MD, MPH, a physician who treats homeless veterans, and a clinical professor of family and community medicine at the University of California, San Francisco.

Bamberger acknowledged that Cal-AIM is not insignificant, but federal regulations still restrict healthcare dollars from being used for “room and board.” One possible outcome is Cal-AIM could pay for the “supportive” part of permanent supportive housing.
A key factor in all of this is the lack of affordable, low-income housing in California — this needs to be addressed before housing as a healthcare intervention can become a reality.

“We’re many decades behind in our investment in building affordable housing,” Bamberger said, pointing out that the disparity in wealth has never been greater. “People who desperately need housing are being left behind.”

The need for Permanent Supportive Housing
For nonprofit organizations like Housing Matters that offer temporary shelter and an array of services and solutions for helping people experiencing homelessness, Cal-AIM promises to free up financial resources so that they can be directed to what has become an important community goal: building permanent supportive housing (PSH) in Santa Cruz County.

“Just putting someone in an apartment is not necessarily going to end their homelessness,” said Housing Matters’ Stagg.

What’s needed is a multifaceted housing intervention that coordinates medical care with wraparound services that include counseling, job training, help with substance use disorder, and other assistance that people can easily access. “Housing first, but not housing only,” is how Stagg described it.

To address the need for permanent supportive housing in Santa Cruz County, Housing Matters is in the process of building a 120-unit residence on its campus that will provide housing primarily for people suffering from chronic homelessness. But those units, scheduled for construction in 2023, won’t be nearly enough to house everyone who needs it.

“We need more capacity,” said Santa Cruz County’s Ratner. “Right now we have hundreds of people with housing vouchers, but it’s very hard to find [landlords] who will take the vouchers.”

“Healthcare providers are getting involved now more than ever because we are recognizing more and more how social determinants of health are really impacting our ability to take care of our communities,” explained Dr. Nanette Mickiewicz, M.D., president and CEO of Dominican Hospital Santa Cruz.

Mickiewicz, who has been a physician in Santa Cruz for 30 years, said that a lack of stable, affordable housing affects healthcare for everyone, and not just those experiencing homelessness. She described how unhoused patients tend to seek emergency room care much more frequently than patients who are housed. Unhoused patients also tend to have longer hospital stays, which can cause challenges in terms of being able to offer timely care to all who need it.

“I think the ability to write a prescription [for housing] or facilitate a safe discharge for someone who is facing a significant medical or behavioral health issue would be… amazing,” Mickiewicz said. “I think patients would have much better outcomes, and I think the cost of healthcare would go down.”

Other healthcare providers are coming to a similar conclusion. In April, Kaiser Permanente, California’s largest private insurer, announced it would increase its existing investment in affordable housing to $400 million. The money will be spent through its Thriving Communities Fund, a social impact investment fund that buys properties that might otherwise be scooped up by developers looking to renovate older apartments and force out low-income residents. Kaiser’s Thriving Communities Fund also invests in the development of permanent supportive housing, including Housing Matters’ Harvey West Studios.

Given the high cost of healthcare and the fact that people experiencing homelessness often have more complex medical needs, it’s really becoming an economic imperative for healthcare providers to get involved in building capacity for permanent supportive housing, summed up by Housing Matters’ Stagg.

In a perfect world, “a doctor would say this person needs housing, and there would be capacity and open units, and that would be the referral into the system for someone experiencing homelessness or housing instability because they are seen as highly vulnerable,” Stagg said, but doctors being able to write that kind of prescription is, for now, “kind of the North star.”

Claudia Graziano Burgin is a Santa Cruz-based freelance writer who specializes in writing about community issues, and for local nonprofits.