Jennifer’s story of resilience and hope 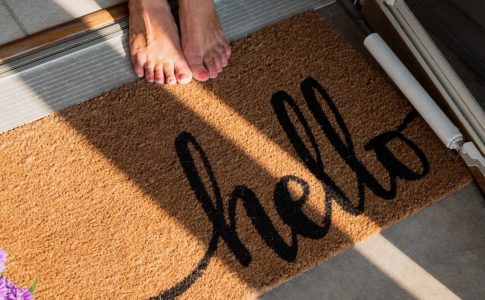 Jennifer came to the Rebele Family Shelter (RFS) after many years of experiencing homelessness. As a mother of three, Jennifer was seeking stability for both herself and her children and RFS became just that. By working with her case manager, Jennifer quickly found housing and is now able to provide her girls with a space to call home. Below, Jennifer shares her struggle of being unhoused and how transformative being housed can be.

“I grew up in Santa Cruz, my mom had me when she was 18 and raised me all on her own. She didn’t have many positive role models or good influences in her life and we used to fight often. I started experimenting with drugs at a young age, which continued until I was 26 years old. I was homeless on and off beginning at the age of 16 and I got into a lot of trouble. I didn’t understand what I was doing until I was much older. I was so young and naive.

I had my first daughter when I was 27. At that time, I was living with her father. We had two more kids together but we eventually split up. He took everything from me. My credit went from good to extremely poor, and finding housing became very hard.

I hit dead end after dead end in my housing search and couldn’t find any property manager who would rent to me because of my credit. Eventually, I had to leave the house and I ended up homeless.

I had friends who let me stay at their place during this time so I didn’t have to be out on the street. I’ve maintained my storage too, so I haven’t lost everything I have. But I’ve missed so many moments with my children.

While I was homeless, I’d go over to their dad’s house and watch my girls throughout the day while he was at work. We’d all have dinner together and then I’d leave. It was like that for two years. I felt like their babysitter, like they weren’t even my kids.

And being away from them at night was really hard for them. They would call me and say, ‘mommy, do you have somewhere to stay tonight?’. It is horrible to hear that your children are so worried about you so I made sure I always had a place to sleep, so they knew I was safe and wouldn’t worry.

I often felt like giving up during this time, like I couldn’t do it, like I couldn’t make it happen. It has been really hard to hold my head up high because I don’t feel that I am setting a good example for my kids. I want the best for them, I want them to try hard and know they can do more in life than what they see around them.

Throughout this time, Diana Flores, the Rebele Family Shelter (RFS) Program Manager, kept reaching out to me because I was on the waiting list for support at Housing Matters. I was very hesitant about coming here but had heard of many people who stayed at RFS and who were permanently housed. So I thought the least I could do was try a program like this, get some housing leads, and see what happened.

I stayed at RFS for four months with my daughters. I couldn’t have asked for more as far as having a good clean environment. We had a one-bedroom apartment in RFS and a big living room and bathroom. It was hard having my daughters there but I knew they were safe and that we were on the right path together.

I suffer from extreme PTSD from my childhood and everything I’ve been through, and because of this disability, my case managers were able to connect me with a disability voucher which made me eligible for housing.

I was floored when I learned about this voucher. I would’ve never known that a disability voucher and housing was available to me without my case manager’s help.

So now I get to move into an apartment and get my stuff out of storage and hang my pictures up on the wall. And my kids will have their own room to decorate, which they’re so excited about. It’ll be really nice to be able to have our own furniture and just settle into our new home.

I am looking forward to being with my kids and being able to provide for them and give them a safe place to call home. I am so relieved that they’ll be able to have friends over and have sleepovers and just be kids. And for me? I hope to go to nursing school and have a stable and steady career so that I can continue to provide for my kids and give them the life they deserve. I am so grateful to have the opportunity to do that for them.”