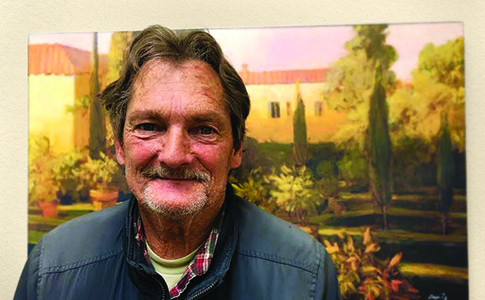 Mario’s hope is to find a way to help the agencies that saved his life expand, so more people can access their services. That, and get back to fishing.

A third-generation Santa Cruzian, Mario says his favorite things about his hometown are the ocean and the mountains, but mostly the good people — an impressive outlook given what he’s been through. A self-described introvert who used to work in construction, Mario almost lost his leg while unhoused. After a group of teenagers ran over his leg with their bikes while he slept, Mario was left with a wound that simply could not heal without being in the clean environment that only the indoors would afford. And things would get a lot worse before they got better.

After multiple hospital stays, the frustration of trying to keep his wound clean while living on the streets, and facing the possibility of amputation, Mario found his way to the Recuperative Care Center (RCC) at Housing Matters. At this point, he was past the point of caring what happened to him. But he says the staff at the RCC and Homeless Persons Health Project, the County-run medical clinic located on the Housing Matters campus, saved his life.

“When you got people behind you, that’s what keeps you going,” says Mario. “It’s not even about personal inner strength. That support puts fire back in you to want to survive.”

Mario spent hours and hours during his four months at the RCC searching for housing. Everywhere he turned, he found dead ends: landlords who only wanted cash, lack of availability, unaffordable units. He had faith in his persistence, sometimes calling certain apartment complexes on multiple occasions to see if availability had changed. “I must have looked at 1000 listings, literally,” he recounts.

About the third time he called one Watsonville apartment complex, he was really used to hearing no. He went through the motions, checking on his application, asking about availability, already thinking ahead to the next steps in his search. In an instant, everything changed: they had a unit open. And it was his for the taking. The gratitude that swelled within Mario at that moment continues to be a grounding force for him.

Today, Mario is still fighting to keep his leg healthy, but it’s a lot easier from the comfort of his own apartment. He says, “You gotta plant your feet before you grow.” And growing is exactly what he intends to do.