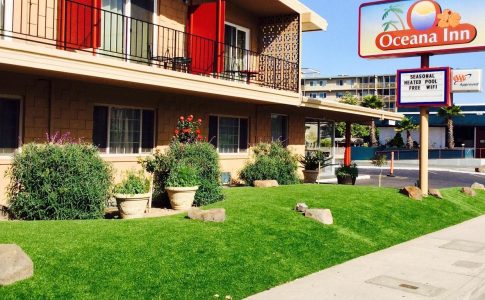 Oceana Inn served as an emergency shelter for more than two years, sheltering hundreds of seniors and others experiencing homelessness during the worst of the COVID-19 pandemic.

On June 24th, the motel officially ended its participation in the emergency shelter program known as Project Roomkey, closing its doors to the remaining program participants who were receiving shelter there.

“It’s disappointing when you hear that there are people who were being sheltered and who are now at risk of returning to street homelessness,” says Pan Narez, one of the Program Managers for the Rehousing Wave. “But it doesn’t mean that those people are no longer being helped.”

Pan is the point person at Housing Matters for the County’s Rehousing Wave, a collaborative effort that pools housing resources from local nonprofits and community organizations including Housing Matters, Abode Services, Santa Cruz County’s Housing for Health Division, and the Housing Authority of the County of Santa Cruz.

Pan points out that tremendous progress has been made to date. “The Rehousing Wave has housed close to 100 households in less than a year,” says Pan. Even as motel shelter guests packed up to leave the Oceana Inn on Friday, at least two were in the process of signing leases.

Those who were not able to secure permanent housing by last week’s deadline were moving solidly toward that goal, getting medical and behavioral health needs addressed and solving logistical problems that can make it harder to get to apartment showings or complete rental applications. All who were eligible had already received or are in the process of receiving Housing Choice vouchers, commonly known as Section 8, which is a Federal housing subsidy. “A lot of work has been done to get people on the path to permanent housing,” Pan says. That work will continue until everyone is housed.

A question of capacity

Housing Matters takes a Housing First approach to helping people find pathways out of homelessness, which means that there are no “housing readiness” requirements to fulfill before someone receives housing support and services. Yet not everyone who needs housing can get housed within a specific time frame—especially in Santa Cruz County, one of the most difficult housing markets in the country.

“The biggest challenge is housing availability and competition,” says Tom Stagg, Chief Initiatives Officer at Housing Matters. There might be hundreds of people looking for apartments at the same time across all of our programs, and that doesn’t include all the other people in the community who may be searching for apartments as well. “Being first in line is really hard,” he notes. “Sometimes it’s whoever can get there right away.”

Housing capacity in Santa Cruz County is expected to slowly increase over the next few years, thanks to recent legislation that triples affordable housing building targets in California. But many more landlords need to be willing to accept housing vouchers to meet the current demand, says Tom. On the plus side, programs like Project Roomkey showed what is possible when a community pulls together in the face of a crisis.

“We’ve now seen what can happen when we put resources into housing people,” Tom says. “We increased our shelter capacity, increased the number of available housing vouchers, and increased staffing to help people experiencing homelessness. We need to find ongoing sources of funding to continue supporting these programs if we want to keep seeing results.”