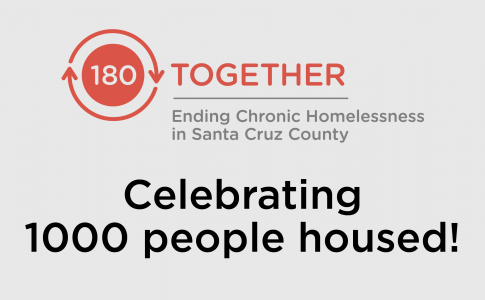 Long-known as 180/2020, the newly named 180 Together initiative was launched in 2012 with the goal of ending chronic homelessness in Santa Cruz County by the year 2020. The number “180” is used to represent a 180-degree change for its clients and the community. It is responsible for long-term systems change in the county, and the initiative has been successful in greatly reducing the number of people experiencing chronic homelessness in Santa Cruz County, from an estimated 1004 people in 2011 to about 400 in 2019.

“We have made tremendous progress,” said Housing Matters Executive Director Phil Kramer. “We’re still seeing people falling into chronic homelessness in our community, which means we still have a lot of work to do. But to house 1000 people — people who were formerly chronically homeless, and likely had many barriers to overcome to get into housing — that’s truly something.”

Chronic homelessness is defined as experiencing homelessness many times, or for at least a year, while struggling with a disabling condition that affects their ability to get or retain housing.

More often than not, these individuals need continuing support to stay housed, whether in the form of case management, financial support, or mental or physical health support. Sometimes this is due to issues that led to their homelessness, sometimes it is because the realities of being chronically homeless can take an enormous toll on a person’s ability to be self-sufficient.

Fortunately, there is a type of housing specifically for people who need support indefinitely. It’s called permanent supportive housing, and it provides the most vulnerable members of our community with the resources they need to lead stable, fruitful lives.

Kramer holds the initiative near and dear to his heart. He was the project manager when it very first launched. At that time, it was called 180/180.

By 2014, the collective effort had resulted in 204 chronically homeless individuals getting housed. So, it was time to reset some goals, and rename the initiative.

“The progress we were making as a community was truly unprecedented,” Kramer said. “And so we set our sights even higher, and renamed the initiative 180/2020.”

Housing Matters is the lead agency for the initiative, but it is truly a multi-agency collaboration. Kramer explained that prior to the launch of the initiative, each agency was working in a silo. While everyone was doing great work, the lack of coordination meant slower results, and a more confusing system for people experiencing homelessness.

Stagg explained that the bimonthly workgroup meetings, while simple, have been instrumental in connecting people with housing more quickly and effectively.

“Having a room (or zoom) full of professionals who are all connected with various resources means that problems can be solved in the moment,” he said. “What might take a single case manager a week takes the group five minutes.”

The weekly workgroup meeting is just one example of how the 180/2020 initiative’s systems change efforts have manifested. Smart Path, the county’s relatively new coordinated entry system, is another. And thanks to 180/2020’s collaboration with the Housing Authority, there is now a Housing Choice Voucher designed specifically for disabled and medically vulnerable individuals.

“All efforts across the county are now much more unified by default,” said Kramer. “That’s the beauty of successful systems change — an improved way of working becomes the norm.”

There is still a lot of work to do. Chronic homelessness in Santa Cruz County still exists for hundreds of people.

Kramer explained that the initiative will continue to operate, with bigger projects on the horizon, and a new name: 180 Together.

“We will continue to work hand-in-hand to serve the most vulnerable members of our community,” he said. “Chronic homelessness isn’t an inevitability. I know that with coordinated efforts and community will, we can ensure nobody in Santa Cruz County experiences the trauma of chronic homelessness.”