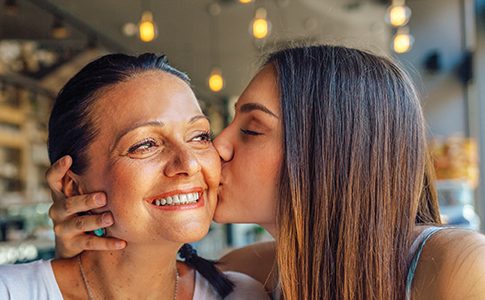 For 17 years, Nina raised her daughter on her own, with limited resources but infinite love and commitment. The responsibility of getting her daughter to school, supporting her growth, and providing for herself and her daughter fell to Nina and Nina only. When she met Tom, it felt too good to be true. She found herself imagining the days of her single-parent lifestyle coming to an end, finally having the support of someone in her life who truly cared about her. Tom was kind. He made her feel secure. He was the kind of guy that would surprise her with a night out at the Boardwalk. They’d ride the Giant Dipper as many times as she wanted: wind streaking through her hair, feeling giddy like a teen again.

When Nina and her teenage daughter moved in with Tom, it felt right. These moments — the butterflies-in-her-gut kind of moments — were the ones with a front seat in her heart. She traced them in her mind on a loop. “Tom is kind,” she repeated to herself.

Everything changed on that misty September night when he hit her for the first time. Especially when that became two times, then three times, and then four. She clutched the kind memories they shared like a beautiful bird to her chest, too transfixed with its radiance to let it go.

Tom had not only become a source of emotional support for Nina, he was now the reason they had a home.

To Nina, it seemed better to stay, even if it meant enduring abuse, than to move her daughter to the streets. The protection of her daughter was Nina’s priority and in her mind, she had no other options.“Things will get better,” she told herself.

Tom’s anger did not get better; if anything it worsened. With nowhere else to go, Nina turned to drugs to self-medicate her pain and depression, numbing the fear and anxiety she was constantly carrying. “I thought I had no hope at all,” she said.

Then things took a turn for the better. Nina was connected with a county caseworker a while back who referred her to Housing Matters. At first, Nina was hesitant to try to get services at Housing Matters. She’d been denied services everywhere else and wasn’t ready for more false hope. On top of that, she wasn’t ready to admit that her relationship with Tom was over.

While this process would eventually end in stability, every step of the journey was paved with uncertainty. Nina knew something had to give. She summoned the same power that sustained her while raising her daughter on her own and accepted the help. She knew she and her daughter deserved better.

Nina was connected with Sarah, a Housing Matters case manager who gave intimate attention to her experience. Sarah was a shoulder to lean on, a steadfast advocate, and a precious resource. This was something Nina had never truly had. Within a few months, Sarah helped Nina and her daughter move into a beautiful studio in Soquel. With the stability of housing grounding her, she broke up with Tom, got a job as a dental office assistant, and even added a new member to their family: a dog named Spicy.

Today, you’ll find Nina and her daughter housed and strolling the Soquel sidewalks with their dog. Today, Nina is sober. With the support of her community, Nina became the architect of her own bright ending after so much darkness.

Sometimes, all we need is a little support to make the courageous step to ask for help and accept it. Case managers, like Sarah, dedicate their lives to bring this support for members of our community that need a hand to hold or a shoulder to lean on. Nina’s story resembles that of many women and families in our community who end up relying on unsafe relationships and unhealthy living conditions just to get by. In Santa Cruz County, domestic violence cases, like Nina’s, represent 10% of the homeless population.