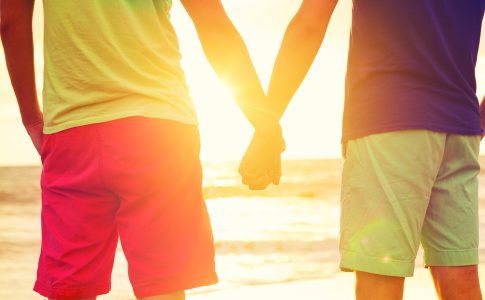 If you ask Ray what the future looks like, he will tell you in one word: stable. Ray, a thirty-year-old cosmetologist with a Southern drawl, and his partner, David, found housing and a pathway forward after more than two years of facing discrimination, assault and battling substance use while experiencing homelessness in Santa Cruz.

Ray and David found their way to Housing Matters while seeking assistance after David was severely assaulted on a sunny July day in 2016. Though their relationship was still new at the time of the assault, Ray and David had found in each other a rock in the stormy sea of uncertainty that comes with homelessness, and worked together to find the resources they needed.

Housing Matters connected the couple with Encompass Community Services’ Housing for Health program, which allowed both Ray and David to receive additional case management support. After meeting several dead ends while trying to find housing on their own, David, who still needed leg surgery as a result of the attack, was soon referred for a Disabled and Medically Vulnerable (DMV) housing voucher. Knowing their relationship was stronger than ever, David added Ray to his voucher so they could find housing together.

Today, the couple has a roof over their heads, and Ray is getting his cosmetology license renewed. There may even be wedding bells in the future. Ray would like to thank their case managers from multiple agencies, as they always “went the extra mile for them.”

“The support is there, you just have to reach out and take it,” Ray said.