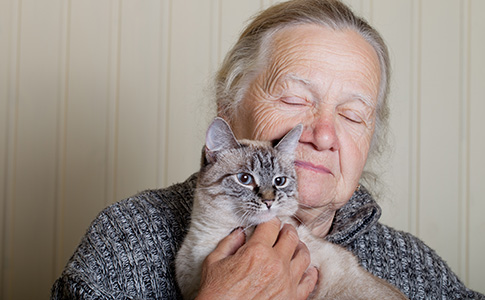 When I first became homeless, I was married to my husband, Darel. He and I did everything together. He had my back when I first lost my housing in the late ’90s and really looked out for me while we were together. We supported each other in every way we could. He struggled with seizures and other health complications, which is hard to handle alone, so I was there for him throughout it all, from seeing doctors, to getting his medications organized, to helping him manage episodes. At the end of the day, though, we had so much fun camping and traveling around together. We would bike for miles in search for work. We made the best of our situation.

I can remember one time, in the early 2000s, Darel’s aunt passed away and the memorial was in Tennessee. So, we packed up our things and biked to Memphis from Santa Cruz. It took us 7 months to get there, and we made it just in time. We worked along the way and introduced ourselves to the police in every town, letting them know we were just passing through. We met some of the kindest people on this trip, religious groups who took us in, friendly smiles on the road. It was a beautiful adventure.

After the visit, we returned home to Santa Cruz and secured housing for ourselves. We lived in a beautiful little apartment for a couple years with some money we saved from working on the road. August of 2005 rolled around and Darel’s health continued to decrease. Later that month, I lost him.

Our apartment was too expensive for me to afford alone, so I found myself homeless a few months later. Without Darel, I had no protection on the streets and really did not want to have to re-enter this way of living. I came to Housing Matters after some time of camping alone, ready to find my way forward. I was in and out of the Loft for some time until I finally found a place to call home.

Holding the keys to my new house was a feeling I cannot put words to and having the support of my Section 8 voucher has changed my life. Honestly, I was so excited to be out of the shelter. It served its purpose in my life and helped me a lot, but I was ready to have my own space and some peace and quiet.

My home in Watsonville, surrounded by farms and open space, gave me exactly that. I am now a part of a beautiful community with neighbors that always check in on me. Darel was my support for so long and losing that was really hard for me. My new home, my new neighborhood, has really filled that gap. It has become the stability and support that I lost when he passed away. My neighbor Joe always stops by when he’s on his way into town to check if I need anything. No matter what I ask for, he doubles it so I make sure to pick him up some treats when I go into town to thank him. He especially loves a surprise pack of smokes.

The support I received while staying at Housing Matters was more than I could have ever imagined. These people were the stability and support that I was desperately searching for after Darel passed. They pushed me to keep moving forward and stood beside me throughout every step of my journey into housing. Because of their dedication to my future and my well-being, I was able to make this happen for myself. I am not sure if it would have happened without them, to be quite honest.

And now I am settled. I spend time with my neighbors, watch movies, and recently I welcomed two little kittens into my home. I now understand why people say their pets are their children; these cats have become my world. They have such lively personalities and keep me busy throughout the days. I also spend a lot more time with some family members that live around Watsonville. My niece especially loves to come and see my kittens. They are growing to like her. They know she will share her food with them when she comes over, so they’ve started to climb up her leg while she is eating to get bites. Smart little devils, aren’t they?

*A stock photo has been used at Sherry’s request

This story was collected in January of 2021 by Andrea Feltz, Community Engagement Manager